A.K. Benedict read English at Cambridge and Creative Writing at the University of Sussex. Her short stories and poems have appeared in journals and anthologies including, The Best British Short Stories 2012. Her second novel, the highly anticipated (it is with me!) Jonathan Dark or the Evidence of Ghosts, the follow-up to her critically acclaimed debut, The Beauty of Murder, is released at the end of this year.

1- Where did the idea come from for a time travelling serial killer?

The idea came one night when I was a student at Cambridge. I was walking back to my room from the college bar through the narrow alleys that snake behind King’s Parade and heard footsteps behind me. I looked around but no one was there. I assumed that it was the echo of my steps rebounding on the stone and walked on. The footsteps continued, growing closer. Still no one there. I ran, nearly tripping on the cobbles, until I got to my front door. I slammed the metal door shut behind me and sank onto the floor, laughing at myself for scaring so easily. Then there were three heavy knocks on the door. I peeked through the letterbox. There was no one there. And that was when I thought of a time-travelling serial killer. It was years before the novel came together but Jackamore Grass was there all along, whispering to me and laughing.

2- Are you a plotter or a pantster?

I plot key points along the way and trust that my pants will deal with the rest! Usually I know the last line before I start writing and fly, sleep-deprived and coffee-fuelled, towards it.

3- Is there any particular author or book that influenced you in any way either growing up or as an adult?

Roald Dahl was one of my first influences as a writer, particularly when I discovered his short stories. I read ‘Tales of the Unexpected’ and ‘The Wonderful Story of Henry Sugar and Other Stories’ over and over and loved the twinkling humour, darkness, and unease. His writing made much more sense to me than many books meant for children and led me to Poe, Lovecraft and M R James.Neil Gaiman has been inspiring me since I discovered ‘The Sandman’ when I was a teenager. He writes with joy and wonder, spans genres and forms and creates worlds that I don’t want to leave. His lecture ‘Make Good Art’ always picks me up and makes me pick up a pen on doubt filled days.

4 - Do you have any kind of rituals you follow when you write? 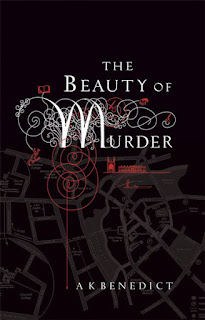 I smell things! My writing room is lined with tiny bottles from indie olfactory geniuses such as Black Phoenix Alchemy Lab and every day Isniff the vials like a deranged apothecary to select oils that help me imagine a scene. For The Beauty of Murder I collected a scent library of roses, books, bonfires, stone and graveyard dirt; for my new book, Jonathan Dark or The Evidence of Ghosts, I keep returning to oils that put me in mind of haunted London such as BPALs ‘Pile of Fallen Leaves’.

5 - Music or silence when writing?

I make up a playlist for each book or story and listen to it on a loop while writing or editing. The songs usually reflect the mood of the book,the content or the characters’ favourite artists, although I will veto songs I don’t like. Stephen Killigan is a Talking Heads fan so that was fine by me.

6 - If you could travel back in time, when and where would you go?

Today I have a hankering to go to the London Frost Fair of 1683-84. I’d go shopping, see shows and get a hackney coach, all on the frozen Thames. Ask me later and I’ll say another when and another where. That’s the beauty of time travel, you can always pop somewhere else, that and the possibilities for mischief.

7 - Do you have a favourite character from literature?

8 - Coffee and Parkin or Tea and Biscuits?

Can I have morning coffee and then afternoon tea? No? Then, tea and biscuits it is.