Writing is not my full time job. I’ll tell you more about that in question 6.
Actually it happened by accident. Growing up I never thought much about writing, but I was an avid reader. The only time I ever wrote was when my teachers at school made me. I wanted to be an NHL superstar…period.
It was the winter of 2000, my second year of professional hockey, and I was playing in Oklahoma City.  After sustaining a season ending eye injury (one of the scariest moments of my life), I found myself with time on his hands.
My girlfriend at the time, who is now my wife, was attending a French college in Montreal. She received an English assignment to write a short story, and asked me for some help.
I loved the experience—creating vivid characters and generating a wire-taut plot. I sat down at my roommate’s computer and began typing. I wrote a little every day, around my intense rehabilitation schedule and before I knew it I had completed my first manuscript.
I didn’t write with the intention of being published. I wrote for the love of writing.
Thirteen years later, I still write for pleasure—and I still love it! The fact that I am being published is a bonus.

What made you choose crime fiction?

I was always an avid reader. My first books were the Hardy Boys titles, so they are the reason I love mysteries. As an adult, some of my favorite authors are Harlan Coben, Michael Connelly and Greg Iles, so naturally I write what I love to read – mystery/suspense/thriller novels.

“Kiss the Girls” by James Patterson was the first adult crime-book I ever read, and I fell in love with the genres. Probably my favorite crime book to date is “The Poet” by Michael Connelly. I would love to write a Harry Bosch novel. What a great character. 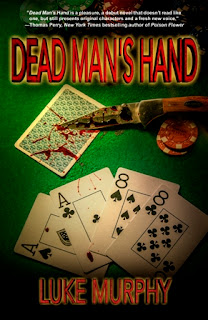 I don’t know if you count thrillers as in the same class as crime-fiction, I’m assuming you do. My favorite thriller writers are Greg Iles and Harlan Coben. I haven’t read a lot outside of my crime-fiction and thriller genres, so this is a tough question. I’m the kind of guy who likes familiarity and rarely strays from what I know. My wife and I really enjoy the Nicholas Sparks movies, does that count?

I’m currently reading Blood Memory by Greg Iles. These days I don’t read as much as I’d like, because I have so much going on.

I always say I write because I can’t sing or dance (LOL). Writing isn’t my full time job, I would have starved long ago if it was.
I’m an elementary school teacher, I tutor Math and English part time and I’m a husband and father. So as you can see, I only write when I find time.
My dream was to play in the NHL. I ended up only playing 4 games for the Florida Panthers in 1999, then injuries and age took over. But it was a fun journey and a wild ride while it lasted.
My dream job today would be to write full time. To make enough money, be able to stay home and write what and when I wanted would certainly be my ultimate goal.
Playing on tour in the PGA wouldn’t be bad either. J

Man, I’ve read so many great books by so many talented writers. The last book I read that actually had one of those “wow” factors was “Pied Piper” by Ridley Pearson.

How do you feel about ebooks vs. print books and alternative vs. conventional publishing?

Guilty as charged, okay, I admit it, I don’t have an ereader. There is just something about holding a book in my hands, the smell and the feel. I can’t explain it but for me I love holding an actual book. That being said, I sell a ton more ebooks than I do paperback, so I appreciate where society is taking us into a paperless future. As for publishing, I’ve always been a traditional kind of guy, but I realize times have changed, and more writers are gaining an opportunity, exposure and a chance to get their books in front of readers though self-publishing and PODs. I think I just enjoy the challenge of being evaluated by my peers, and I think that it is more fulfilling when you realize that a publisher wants to take a chance on your work, rather than you paying to have it done. But I have heard very positive things about self-publishing. It’s different for everyone.


Normally “writing” would be in there, but since baby #3 arrived in May, I haven’t written a thing. So these are the 5 words that sum up my current days:

And, lastly, just for fun..

I have never read 50 Shades of Grey (don’t know if I’d admit it if I had J ), and I probably never will. I heard all about it though. I can totally understand the allure of the content, but I’ve also heard that it is very poorly written, and I probably would get fed up and frustrated half-way through the first chapter. But I do respect the author and what she accomplished with those books. I would certainly like to be as successful as she has become from that series. I’ve actually written a blog post about the book, and if it would have been as well received had a man written it.

For more information on Luke and his books, visit: www.authorlukemurphy.com