Today's Roving Eye interview is with writer and journalist Alex Marwood. Her debut novel, the critically acclaimed psychological thriller, The Wicked Girls, is out now.


When did you first realise that you wanted to write for a living?

Oh, lord, when I was around ten, I think. When I read James Herbert's The Rats. Or maybe the Flambards novels. Or Kurt Vonnegut's The Sirens of Titan. I was one of those kids with lax parents and an adult library card, so I didn't read much of the  stuff one was supposed to read until I got to university, which was probably a good thing - for my life as a writer if not for passing exams.

I suppose mainly just because it's what I read most of myself - that and a fair amount of horror. I've always been interested in the things that make us tick, and I sort of feel that one sees these things laid barest when people are in extremis. We're all a couple of inches of rage away from violence, at least some of the time, and one of the ways examining how we control ourselves is by examining how we lose that control. 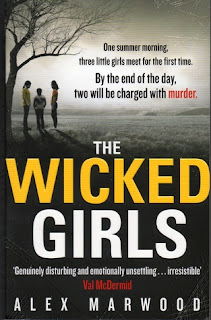 Gone Girl. I've always wanted to do something about narcissistic personality disorder, but I think I'd be very hard-pushed to do it better than Gillian Flynn has done here.

Stephen King. I love his use of language; so simple on the surface and so viscerally effective on the subconscious level. I didn't think Pet Semetary had affected me that much, for instance, until I realised I'd been having nightmares for a month after I finished reading it.

I've always got a lot on the go. At the moment, I'm reading Laura Lippman, Megan Abbot and Alison Gaylin - all brilliant - plus Mary Roach's Spook (on science and the afterlife) and Lawrence Wright's book about Scientology, Going Clear, which, because of the chaotic state of the libel laws in the country, I had to get a friend to send me from America. Oh, and the collected short stories of Elizabeth Taylor in the bathroom.

I'd probably be dead, simple as that. I've thought about giving it up many times - most writers do, I think - but the thought of life without it filled me with such existential despair that I had to make myself finish another chapter.

What are your thoughts concerning the current state of the literary world?

That things aren't as dire as the doomsayers would have us believe. That one of the big problems is that publishers have been largely taken over by widget companies who make the fundamental error of thinking that standard 'growth' measurements can be applied to an industry that doesn't fit them and therefore keep believing that perfectly healthy companies are 'failing'. That the really great thing about ebooks is that authors' back catalogues finally stand a chance of being their pension funds. That publishers are going to have to stop playing dog in the manger with our back catalogues, or risk losing the goose that lays the golden egg.

Six bedsits, trouble with the plumbing and quite a lot of deaths.

And, lastly, just for fun..
Have you read or would you ever consider reading 50 Shades of Grey?

I read the free sample on Amazon. That was plenty. I got the gist.
Posted by Unknown at 11:48