This week, the Roving Eye falls upon the author of the dark and hard-boiled, The Dead Women of Juarez and Tequila Sunset. Ladies and Gentlemen...Sam Hawken.

I first fantasized about writing for a living when I was in my early 20s (a long time ago) and tried my hand at writing truly terrible cyberpunk novels that went absolutely nowhere, career-wise.  I quit writing altogether from ages 26 to 36, vaguely thinking I'd like to get back into it, but never actually putting anything on paper.  Then one day I started typing and wrote a book that was much better than anything I'd written before, at which point I began thinking I might actually be able to make a go of it professionally.  Though it would take me three years of work to get there. 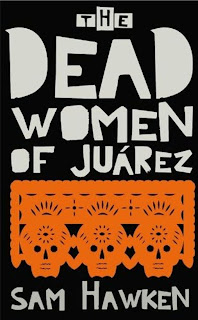 Pure chance.  I'm not even sure how I got there, but I happened to look at a webzine for crime fiction where they were doing a "borderland noir" theme issue.  I found the guest editor's description of this sub genre so compelling that I hammered out a story the next day, which I submitted.  He ended up loving it for some reason, which made me write another crime story later on that was likewise well received.  Right about then I managed to secure an agent, who asked me if I could write a novel in the vein of the first story, so I did it.  That ended up being The Dead Women of Juárez, my first from Serpent's Tail.  They've since bought two more.
What crime novel would you most like to have written?

Without question it would be No Country for Old Men, by Cormac McCarthy.  Reading that book was what made me start writing again.  And I know some people don't consider it truly crime fiction because it has a literary pedigree, but it really is pure crime in its most distilled form.  I love it and reread it often.
Who is your favourite author outside of crime fiction and why? 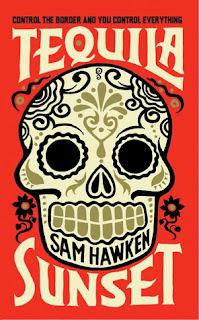 I am probably unhealthily fond of Ernest Hemingway.  When I was first trying to write in a serious way, I tried to emulate him, but picked up all the wrong lessons from his writing and produced dreck.  I'm still nothing but a speck of dust on Hemingway's windshield, but I like to think that now I get him better.  It might simply be a product of getting older, but I suspect being more interested in craft has made me appreciate what he did.  I certainly don't get tired of reading his work.
Who are you reading right now?

Currently I'm reading a novel by Spanish author Rosa Montero, called Tears in Rain.  Though I no longer write in the SF genre, I absolutely love the movie Blade Runner, and her novel directly addresses some of the major themes of that film.  Hence the title, I guess.  It's not subtle.
If you weren’t a writer, what else could you see yourself doing?

Before I was able to make decent money writing, I worked in retail to make ends meet.  I had an interlude where I was doing academic work in the history field, but there was no real money there.  Even so, I wouldn't mind pursuing a position in public history, or working full-time as a researcher in my particular historical field (Holocaust scholarship).
What was the last great book that you read?

That's a really, really tough question.  I can't actually remember the last time I read a book I could unequivocally call great.  Plenty of good books, but no great ones.  I really have to have the pillars of my world shaken before I'd put the label great on something.  Maybe I'm just reading the wrong stuff.
One record and one book to a desert island, what would you take?

Pink Floyd's A Delicate Sound of Thunder and Cormac McCarthy's No Country for Old Men.  I never get tired of either.
What five words best describe your average day?

I'll give you the short version of Missing, my next release from Serpent's Tail (2014):

"A man from Texas has his stepdaughter go missing in Mexico. Blood and tears follow."
And, lastly, just for fun..
Have you read or would you ever consider reading 50 Shades of Grey?

I've already read more of Fifty Shades of Grey than is probably healthy.  I am never, never going to be able to get the images of the tampon scene out of my head, for which crime EL James can rot in Hell.
Posted by Unknown at 13:21