Today's Roving Eye interview is with Sunday Times best selling and acclaimed crime writer, Chris Carter. Chris is the author of four novels, The Crucifix Killer, The Executioner, The Night Stalker and The Death Sculptor, all of which feature Criminal Behaviour Psychologist turned Detective Robert Hunter. His fifth novel, Watch Me Die, is out this coming August. 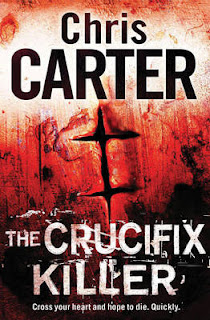 The truth is that I never planned to write a book.  I wasn’t planning on a career in writing and I wasn’t thinking of stories I wanted to write down.  One day, out of the blue, many years after I had left the profession of Criminal Behaviour Psychologist, I thought of a plot for a crazy story – not a crime thriller.  I mentioned it to my girlfriend one morning and she said - ‘You know what?  You should write that book.  It’s a good idea.’  So I said - ‘You know what? I will.’  And so I wrote the first chapter of this crazy story I had in my head.  Once I got to the end of that chapter, I thought to myself - ‘This is crazy.  If I’m gonna put effort and time into writing a book, I should at least write the type of story I like reading – crime thrillers.’  I also thought that due to my background in Criminal Behavior Psychology, I could probably come up with some interesting plot for a psychological thriller.  So I decided to write the first chapter to a crime novel as well (I had no plot whatsoever, I just wrote a chapter that I thought it would make a good opening for a thriller).  A week later I gave both chapters to my girlfriend, asked her to read them and give me her truthful opinion.  Even though crime thrillers aren’t really her thing, she said - ‘I must admit that the crime thriller chapter is more exciting than the other one.’  And that was it, a decision was made.  Crime thriller it was to be.  I then took some time to come up with a story.  That story became The Crucifix Killer.

I’d say that the main reason is because crime fiction appeals to a very larger readership.  So many people are fascinated by them, including me.  But I also wanted to add the criminal psychology aspect to my stories.  A criminal profiler can only profile an offender if he or she is a repeat offender, because repetition creates a pattern, and that pattern is what is analyzed by psychologists.

Of all the different types of serial criminals, killers are no doubt the most intriguing.  Hopefully I have made them interesting my stories as well :-)

None, really.  The reason other crime novels are good books, or become successful, is because those are that author’s ideas and words.  If anyone else had written it, it would not have been the same book.  For that reason, I don’t wish I have written any other book other than the one I have :-)

I couldn’t say I have a favourite author.  I read a lot, and there are so many authors that I like and admire that it would be very hard to narrow it down to one.

The Crucifix Killer, really.  Before writing my first novel, I had never even written a short story.  As I have said - I never planned to write a book, and I wasn’t planning on a career in writing.

Probably selling the Big Issue on a street corner somewhere. 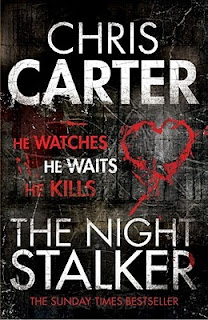 Reading the proof.  When the proof comes, it means that the whole novel is pretty much set to go to press.  All the edits have been done, and you cannot really change anything.  The problem is, it doesn’t matter how many times I edit any of my novels, as soon as I read it over, I’ll find things that I could probably had done better, and would like to change.  That happens every time I read the proof, but I can’t change it anymore. To me, the proof is quite a frustrating read.

Yes, very tough question.  Record, probably the one that I consider one of the best rock albums ever made – Appetite For destruction from Guns and Roses.  I love every song on that album.  Book?  That’s even harder.  Maybe The Analyst by John Katzenbach.  It’s a great story.

What are your thoughts concerning the current state of the literary world?

I don’t really have any.  I’m not a literary writer, I’m a commercial writer, and I believe that the situation at the moment is tough for every profession.

Hunter is after the toughest serial killer he’s ever encountered.  Full of twists and turns :-)

And, lastly, just for fun.

Yes, I’ve read it. And I do understand it’s appeal to so many women.
Posted by Unknown at 11:42